Many moons ago I lived in a magical land called German Village. OK, actually its a suburb of Columbus, Ohio, and reportedly also the largest privately funded restoration project in the country, but to me it is utterly magical - and I am transported to a bygone era each time I return.

Strolling along streets of brick and cobblestone, there is an old-world look and feel to the warren of charming little shops and avenues that belies its proximity to downtown Columbus.

Festive, unique restaurants abound, and a sense of neighborhood exists there that is sorely lacking in many other places I've lived.

Last month I returned to my old stomping grounds, and spent a day immersing myself in German Village, Victorian Village, and Short North areas of Columbus - quite literally looking up my old address.

I love my home near the Atlantic, but there are times when I would very much love to be back in German Village, in my cute little cottage on Beck Alley, sipping a glass of wine and getting ready to meet my friends for a bite at one of our favorite places.

Back then it was Tony's for pasta, Lindey's for brunch, Old Mohawk for a chicken salad quesadilla.

The old-school Clarmont was our go-to for good steaks in a retro-kitsch setting, Max and Erma's (the original) for juicy big burgers and cheesy french onion soup, and of course Schmidt's Sausage Haus - for the incomparable spicy delicious Bahama Mama, tangy warm German potato salad, red cabbage, and creme-puffs as big as your head!

On this occasion, I was in search of a little shop I'd read about on Urbanspoon. My mission - to procure some lovely macarons for a New Years Eve celebration at the home of my dear friend Kiki.

There are enormous, flaky fresh-baked croissants ($2.50 for classic all-butter, $3.50 for pain-au-chocolat) like you've never tasted (outside Paris) and locally sourced jellies to slather on them. I stashed a couple of croissants away for our breakfast the next morning, and I'm still dreaming of them today.

They are famous for their world class macarons, and just one taste confirms why. But who could have just one? Not I, said the cat. I managed to scarf down two - coconut and chocolate (a STEAL at $1.25 each) a chocolate fudgie meringue cookie AND a cherry Kirsch pate de fruit ($1 each). I tucked an assortment of macarons into a bag for our party. They were a big hit.

Snapping pics left and right, I felt like a tourist for the first time on this culinary journey. It was as if I were in the Tiffanys of patisseries, only the prices were surprisingly affordable for these edible gems!

Open daily from 7am to 7pm, they cater to the lucky few who can wrestle a seat in the small dining area. The rest of us are content to hover near the window or the coffee service area and wait for a seat to open, or take our haul to go, in a swank shopping bag. If you can't make it to German Village, they'll ship to you! Check out their website for details, and a delicious feast for the eyes as well.

Pistacia Vera prides themselves on their attention to detail, their classic European techniques and recipes, and their ability to create their own style of unique, edible art - at affordable prices.

This Pistacio Red Currant Dacquoise is just one of their many gluten-free offerings, and features layers of almond and pistachio meringue cake, pistachio buttercream and red currant chiboust. (mini $6/ small $24/ large $39)

And since it's only eight months until my birthday, and eleven months until Christmas, should you be searching for the perfect gift for your favorite blogger.... but then, why wait for the big-name holidays, really? One could celebrate, say, Groundhogs day, for that matter. Hey - that's coming up next week, isn't it? 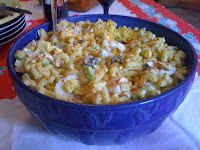 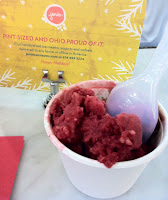