A LIttle Bit Of Gypsy In Me... 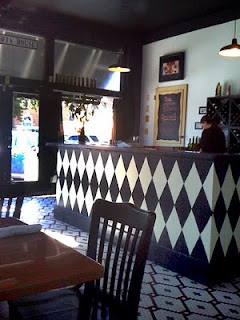 When I walk through the door of 13 Gypsies in Jacksonville, Florida, a haunting refrain runs through my brain...

"Hiding away,
there's a little bit of gypsy in me...
Just hanging around..."

By way of explanation, I'm a nerd and I love Cole Porter. Just go with it.

From my first visit to this enchanting neighborhood bistro I was caught in its spell. What Chef Howard Kirk is cooking up at 13G is nothing short of magic. Simple peasant food is prepared with reverence for its cultural heritage. Its an excursion in culinary focus, not fusion. Breads, cheeses, sausages, cured meats and creme fraiche are made by hand, from scratch, using the best organic imported ingredients.

Sauces, dressings and other accompaniments are carefully considered and artfully applied. Artisanal touches aren't found only in the kitchen, however. The front of the house is a charming space that reminds me of a "black box" theater, set for what promises to be a lively show. Framed art and religious iconography sets a romantic tone, while the harlequin motif counter and byzantine tiled floor lend a whimsical feel.

You know how you go to a restaurant and end up ordering the same thing over and over? That's not how it is at 13G, at least for me. Everything I've tried so far is my favorite.

And I have lots of favorites. 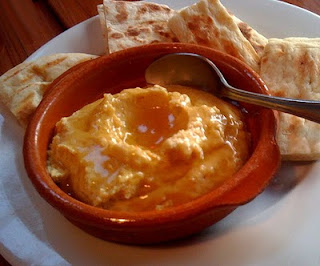 Honey Garlic Hummus - $7
This will smooth the rough edges of of a bad day. Great as a starter or solo with a glass of wine, it is served with 13G's warmed flatbread. 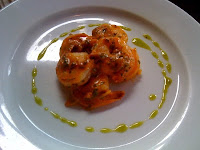 Shrimp Piri-Piri - $9 Fresh shrimp sauteed in a spicy Portuguese ginger-lemon sauce - beautifully presented. Its bright, clean flavors will do the Fandango in your mouth. 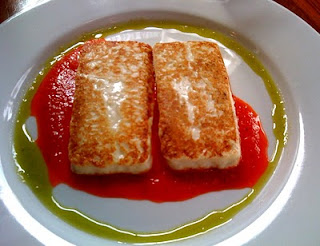 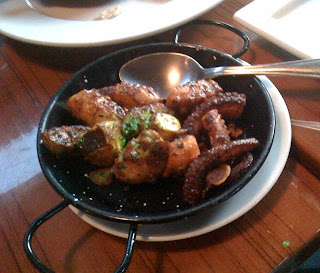 Blackened Octopus - $8
Fabulous, but not for the faint of heart. Sections of tenderized spicy blackened octopus. 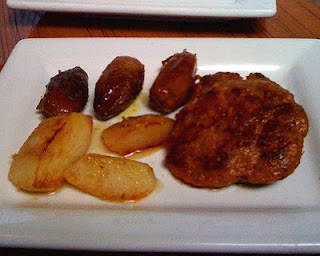 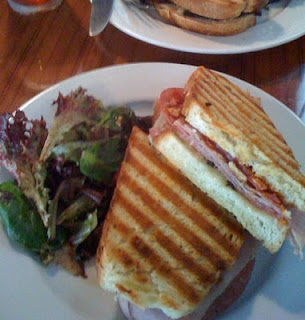 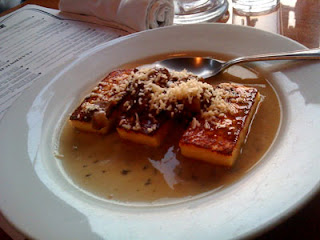 Roman Gnocchi - $8
Semolina and Parmesan flats, with a thyme and mushroom infused sauce - balances delicate texture with earthy flavor. When at 13G, do as the Romans do. You'll be handsomely rewarded. 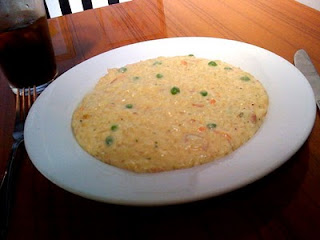 Risotto del dia - (market price) is a true labor of love. The selection varies daily. Bacon Parmesan Cream is heavenly - and the Smoked Salmon with green peas (shown) is more than enough for one diner. Share it with a friend, or take the leftovers home with you for a late night snack.

If we've shared tapas at 13 Gypsies, you know you are special to me. I wouldn't ask just anyone.

On the other hand, if stepping out with this Gypsy is made difficult by geography, I suggest you check the Food Network listings for Diners, Drive-ins & Dives - Chef Howard's handiwork was honored when Guy Fieri and crew visited 13 Gypsies one blustery February day. We were there to bear witness and blather on about the food - which you know is good stuff when not one, not two, but THREE Jax food bloggers are sitting in the audience raving about it... 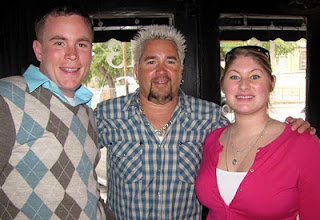 I'll close with this pic of my nephew Chris - currently serving our country in Afghanistan - and his lovely fiance Ginger (a fellow foodie who knows her way around a kitchen as well as anyone I know - and she's just 21) - posing with DDD's handsome host Guy Fieri. I was one proud auntie that day, I can tell you.

Chris claims to be Guy's biggest fan - and Chef Howard was kind enough to reserve space for them at 13G during the taping of DDD! He's a real mensch, that one.

And I'm here to tell ya - Mr Fieri is a real stand up Guy as well. I'm not the type to be starstruck - after many years in theatre and PR, but It was great to see Guy chatting and joking around with Chris and Ginger - knowing just how much it meant to them. Chef H and Guy F are both tops in my book for making that happen. Thanks to Cari S for snapping this pic - and to Jodi K for working her magic too! Good times.

"I can't wait to get
the stage all set,
so I can let
the gypsy in me out."