Just for fun - we entered an online recipe contest and developed these delicious party noshes - a take on the traditional cuban sandwich, using not one but THREE Saucy Mama products from the folks at Barhyte Foods and the Saucy Mama Cafe! The pics were a hit on facebook so we thought we'd share here. Enjoy! 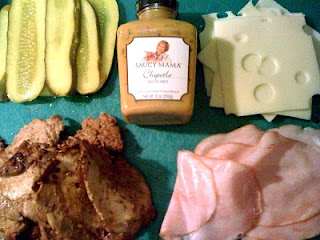 Puncture meat all over to create openings for marinade. Pour one bottle of Saucy Mama Cracked Pepper Marinade and the fresh lime juice in a large plastic zip top bag along with the pork loin, close and shake to coat. Set the bag in a shallow pan and marinate overnight in the refrigerator, turning a few times to allow marinade to permeate. When ready to cook, bring to room temperature.

Remove pork from the bag and place in a shallow glass baking dish. Pour on the remaining marinade and bake in a 350 degree oven until internal temperature has reached 165 (approx. 2 hrs.)  Remove from oven and allow to rest until meat is cool enough to slice. You could do this a day ahead – If so I recommend thinly slicing the meat, returning it to the pan to absorb the juices and brown peppery goodness, then storing in an airtight container in the refrigerator until you are ready to use. Bring to room temperature before you proceed. 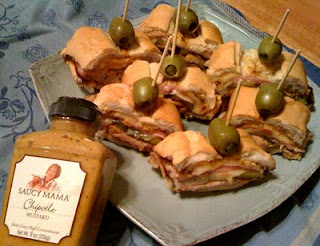 Authentic Cuban loaves work best but if you can’t find them, French baguettes will do.

Slice the loaf lengthwise and flatten both halves slightly with your palms or a heavy skillet. You may want to remove some of the white bread from the inside top of the loaf, to allow more room for the delicious fillings. Brush each cut side liberally with Saucy Mama Chipotle Mustard, and lay them cut side up on the board. Line with fillings –sliced swiss cheese, peppered roast pork, sliced ham, then the pickles. More cheese on top, then pull the two halves together and cut into two equal pieces (to get into the press or skillet).

Toast sandwich in a panini press or large skillet (oil if needed for your cooking utensil – I don’t add any and it comes out fine as long as you watch and don’t scorch it). You just want a good crunch on the bread and melting of the cheese.  Once it is toasted to your liking, remove the halves to the cutting board and skewer them through the top with short skewers topped with a Saucy Mama Jalapeno Stuffed Olive. Each half loaf can be cut into four small slices of sandwich – each with a skewer to hold it together.

For 24 pieces you will need to use 3 whole loaves of bread – but I caution you – you’ll want leftovers!